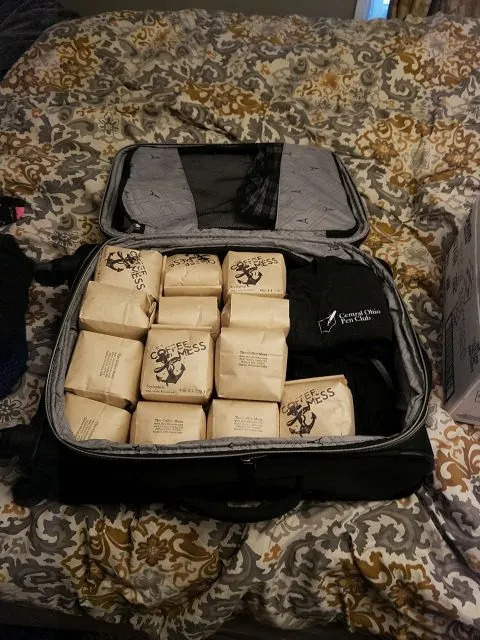 Back in July I was chatting with my buddy Dan Smith, original FPGeek and renowned Nibsmith.
Out of the blue, he asked if I’d like to give him a hand in San Francisco.

Thanks to my indulgent wife and selfless mother-in-law, we made sure the chilluns would be cared for and transported appropriately.

I headed to the airport, and left my phone in the car. After a panicky hour or two, I got on my plane, phone in hand– thanks again to the Indulgent Wife, who retrieved my phone and brought it to me at the airport. Phew.

My connection and trip were uneventful, and I got to SFO right on time. I saw my buddy Mario Campa in baggage claim, my first Pen Person sighting.

Met up with Dan and Laura at the airport, then caught the shuttle to the airport. It was a van full of Pen People, a great start.

After a quick trip to Target for brew gear and provisions, we had a beer (or two) and headed down to socialize at the Wine and Snacks mixer. That was fun, and before long I ended up outside smoking a cigar and talking Black Pens and the like with Old friends Paul Erano, David Isaacson, Ariel from Mexico City, and our new buddy Josh.

It was getting late, but I was going HAM. I met up with Nik Pang and finally got to meet my online buddy Jon Szanto in the flesh. Mario was there with a bottle of Monkey Shoulder, and it’s a miracle I survived. I bailed once I realized there was going to be a

Tired but unhungover, Dan and I hit breakfast, but not before hitting Amazon Prime Now to rectify our TSA-caused knifelessness.

After breakfast we got set up at his 3-table spread and sat around. Dan was busy with nibwork and I was trying to tell one Sailor from another, something I still can’t reliably do after 3 full days of staring at them.

This was my first time attached to a table for an entire show. Turns out I can talk about pens. I sold a hefty handful also.

After the show shut down for the day we went out for pastrami and craft beer at the Refuge in San Carlos. We had a raucous time with Dan’s SF pen friends, laughing our butts off.

After dinner we were up way too late in the hotel room, drinking beer and bloviating (I was the one bloviating.)

It was a big day. Numb from the night before Laura and I worked on pricing the pens before the deluge of penshowgoers, which was thick from 10AM til well after 6PM. Dan was grinding nibs until 730 so we missed out on the Pen Posse dinner at the Kashmiri joint. Boo.

Instead, we got dinner at a low-key and delicious Noodle Joint in town along with the Curnow clan, which was really a treat for food and company.

Back at the hotel we enjoyed some of the live music for a minute, then I hit the sack relatively early.

Sunday was a calmer day than Saturday and I got to wander around the show. I picked up a coupla things, made some friends and poured coffee for those in need.

I got some photos too.

Sunday after the show was calm and fun. I got to hang out with pen friends Jessica and Marta, and my buddy Jarrett motorbiked down from SF city to hang out. We played Idea Darts and geeked out on pens- I sent him home with my ECO 1.5.

After a quiet early morning cab ride to the airport with John Mottishaw and Brian Goulet, I had an uneventful trip home, to be greeted by these feet in Columbus.

We got home and I went for a swim with my kids.

What a trip- thank you to Dan, Laura, the SF Pen Posse and everyone who was there or wanted to be there. I had a splendid time and hope to be back.